Lead guitarist Dave originally conceived the band Wilkes Booth on the legendary Sunset Strip in Hollywood, California, where guitar wizard Steve Vai employed him in the 1992 music video "Nineteen" by Bad4Good for MTV. This was after a failed attempt with another band called Rokzilla.

Rokzilla had been together for years with only one album released to their credit in 1991 — First Foot Forward. Possibly the last cassette tape of First Foot Forward was auctioned in 2017. Read the details and the final price here. 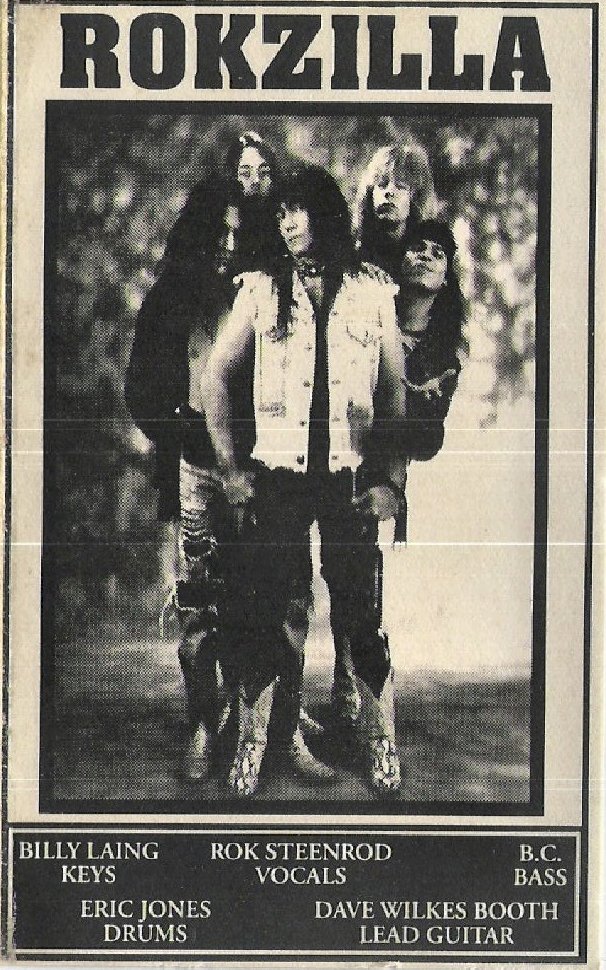 The fans of Rokzilla wanted to keep the momentum and excitement of that band going, so the need for the new band was fulfilled, and Wilkes Booth was formed. 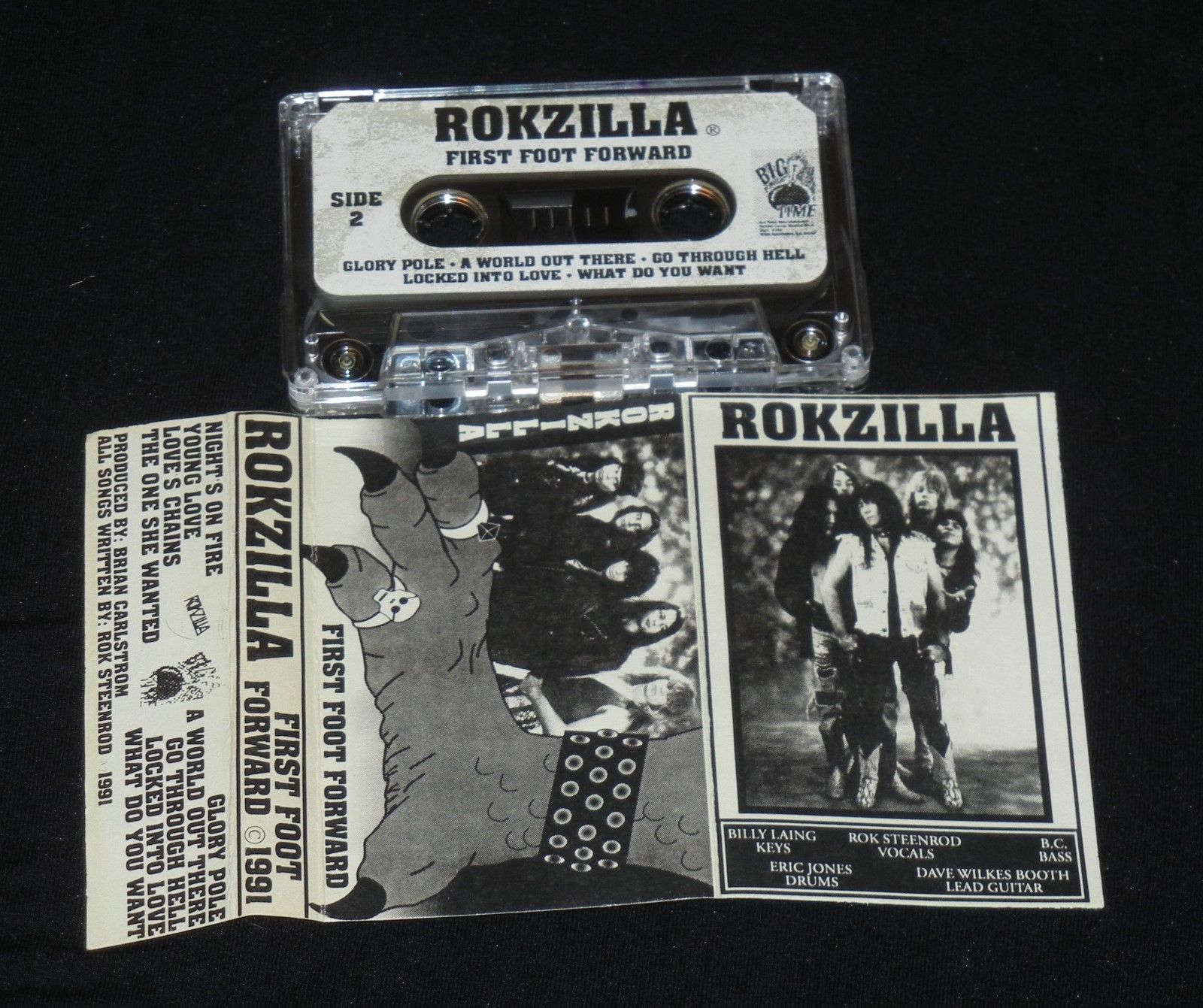 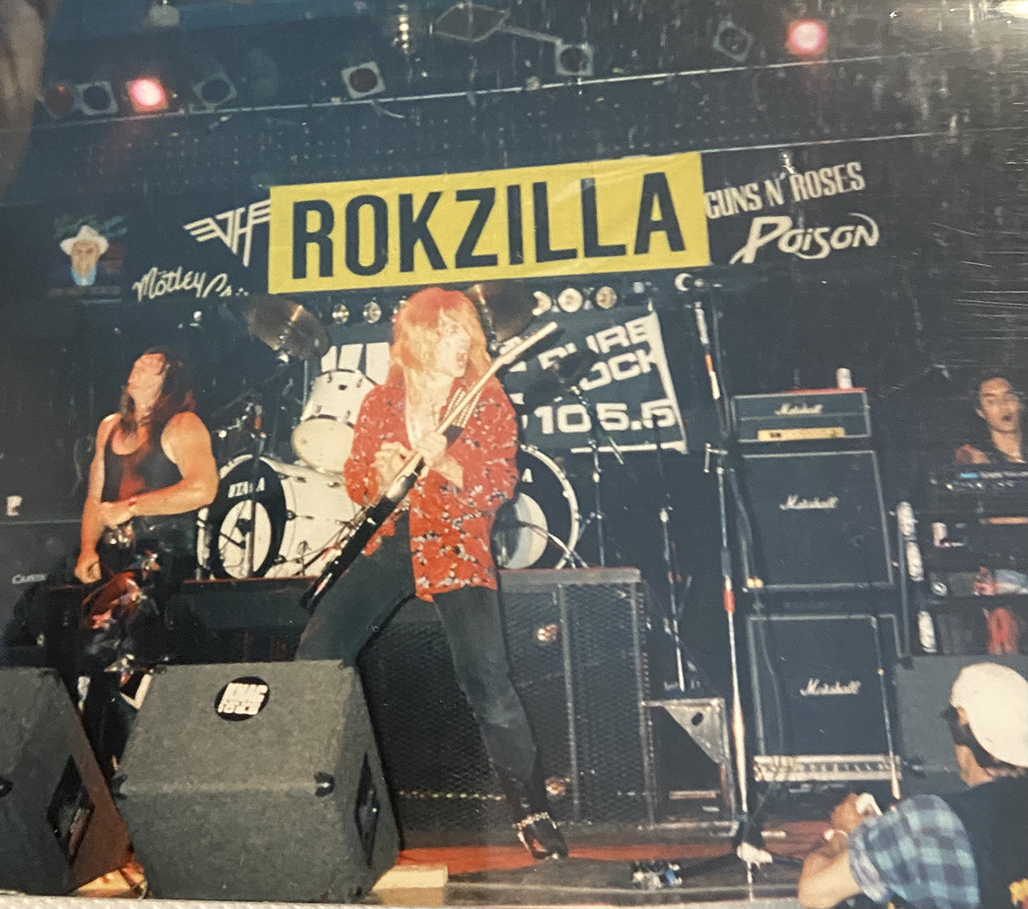 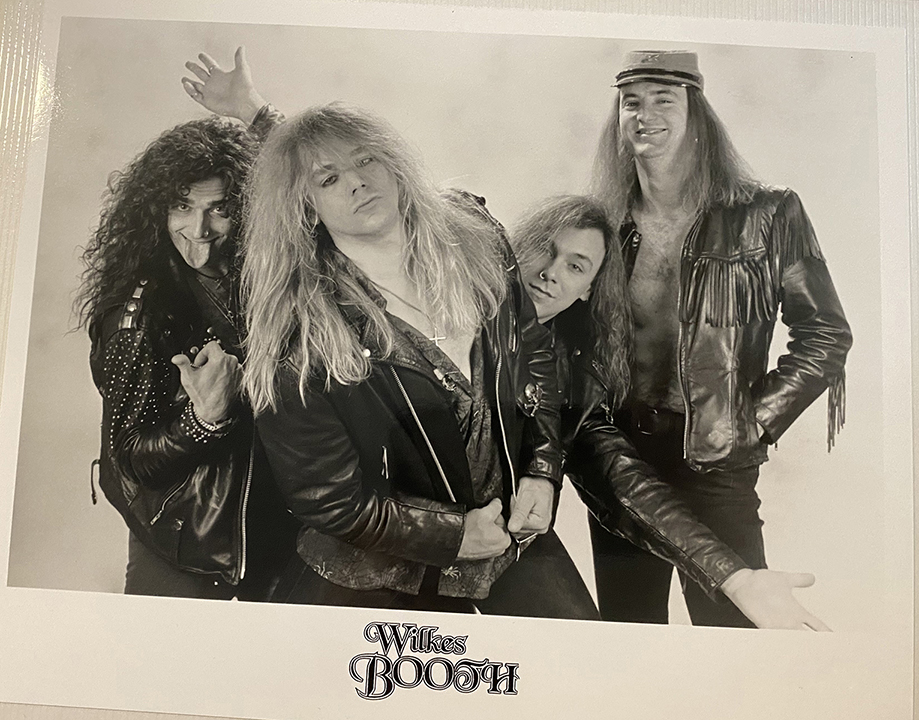 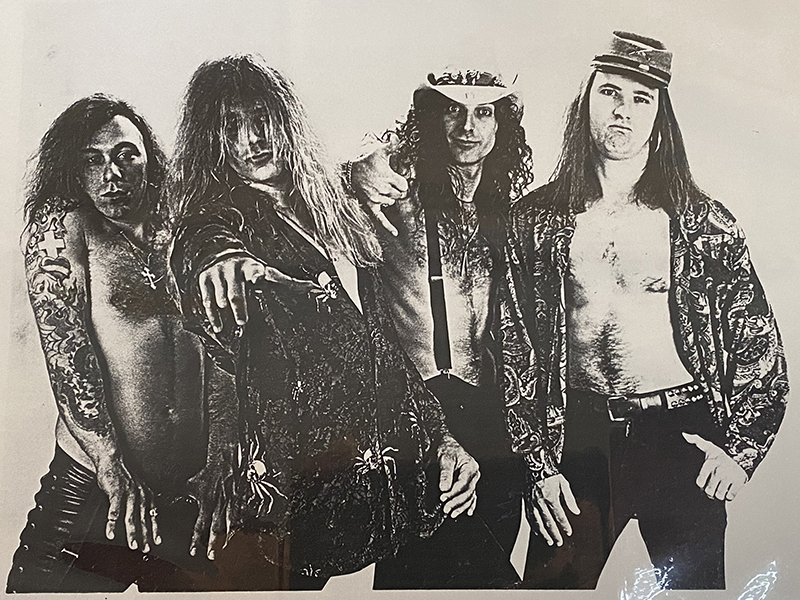 Steve Montoya was only in the band for a few months, but he recorded drum tracks on their first demo "It's Not So Funny," which they used to find Richard "Richie Bitch" Coates. Richie was with the band the longest in Los Angeles. Brian Caldera was with the band only through the first 6-8 months. When he left, Dave took over vocals and recorded them on all Los Angeles material.

Steve Rom left the band in 1993 for a few months. That's when Ruik Holmes came in, but they begged Steve to come back, and he did. Steve left the band because Dave was an asshole to him. He should not have been, he apologized, and they moved on.

Additional members that came and left during their Los Angeles years were:

An interesting side note is that Tony West went on to sing for a band called Blacklist Union, and they had some big success in the late 1990s and early 2000s.

Another weird note is that a drummer named Dustin Trinchini played in Wilkes Booth in October through December of 1994. Dave happened to meet Mike Fittos in December of 1994, and they knew that they belonged together. They had an unbelievable friendship.

Wilkes Booth performed regularly in the famous night clubs such as Gazzarri's, The Roxy Theatre, The Whiskey, and The Troubadour — the very same clubs that spawned acts such as Motley Crue, Van Halen, Guns 'N' Roses, and Poison. They played the same style of music as these bands, but all original in an attempt to achieve the same national status. 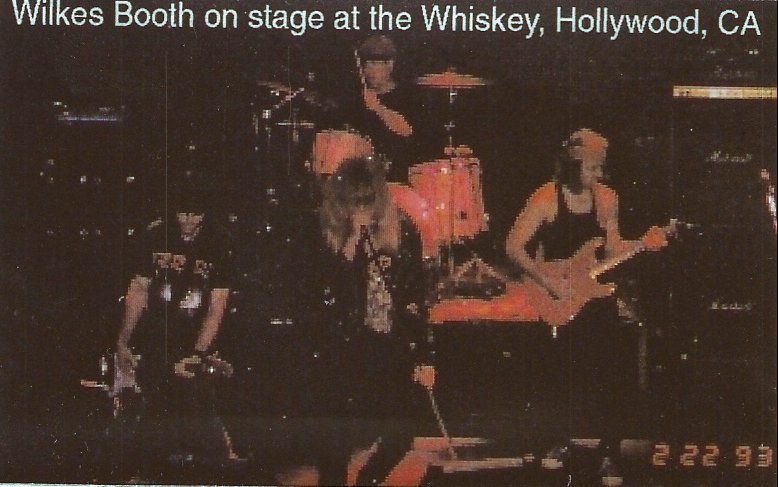 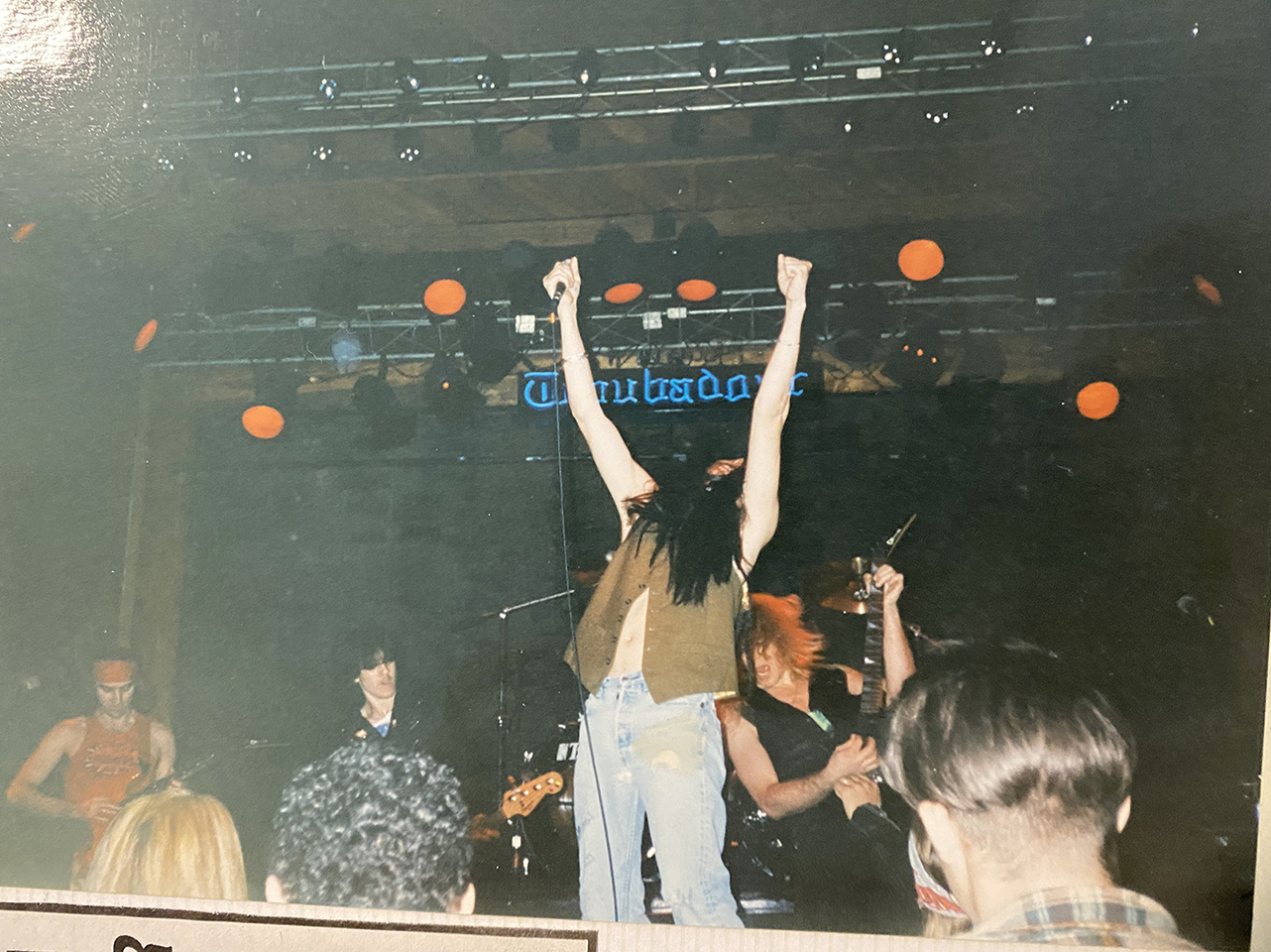 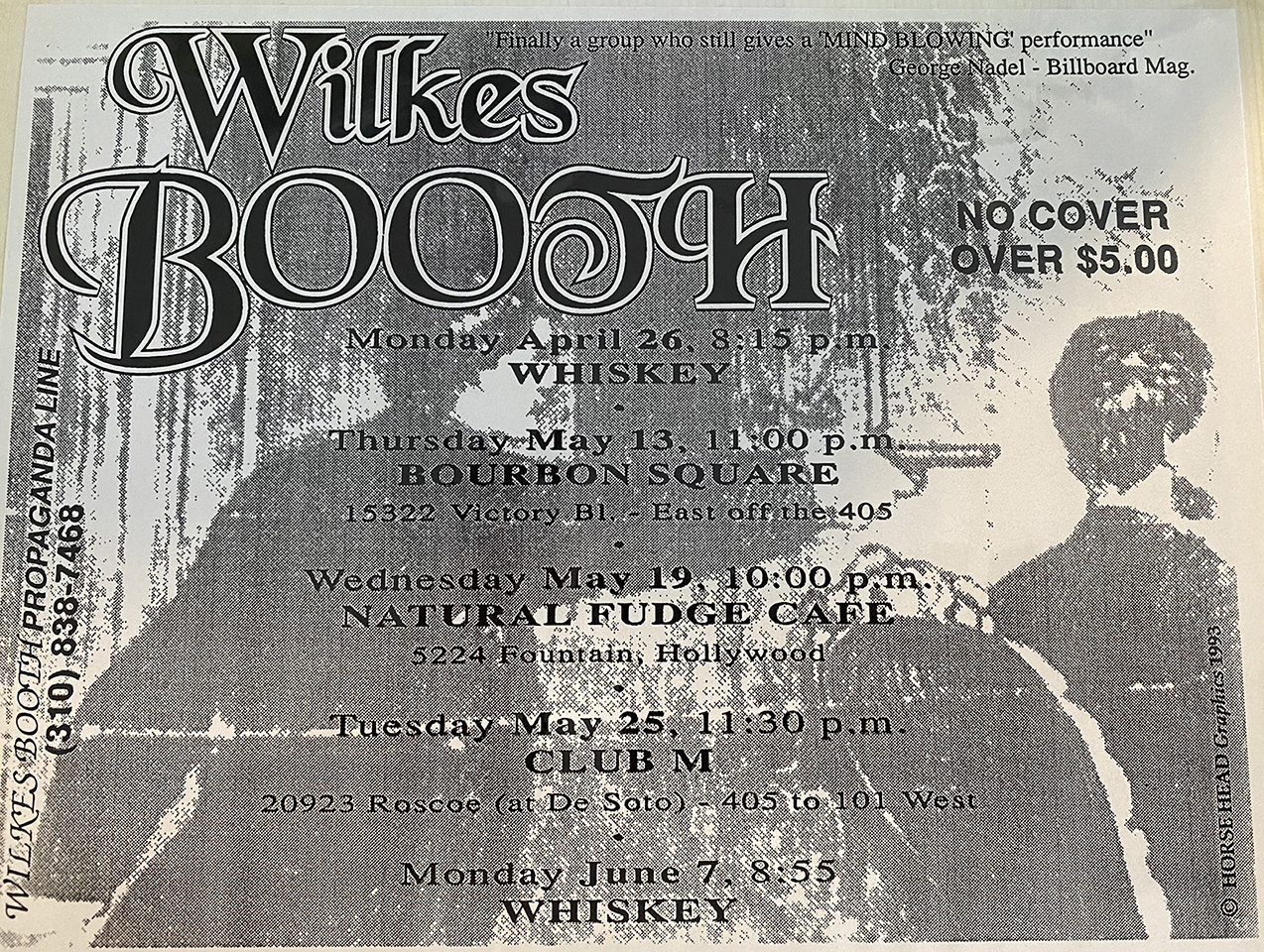 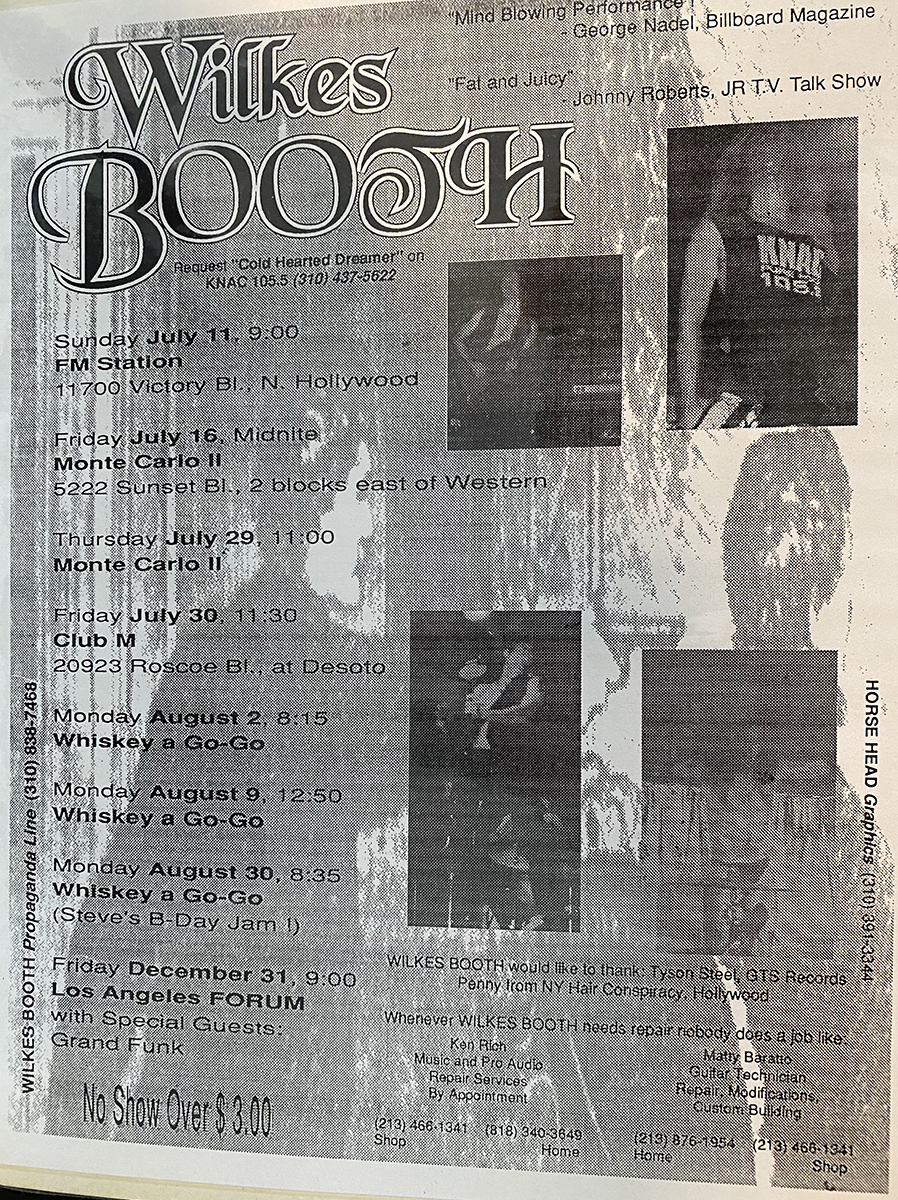 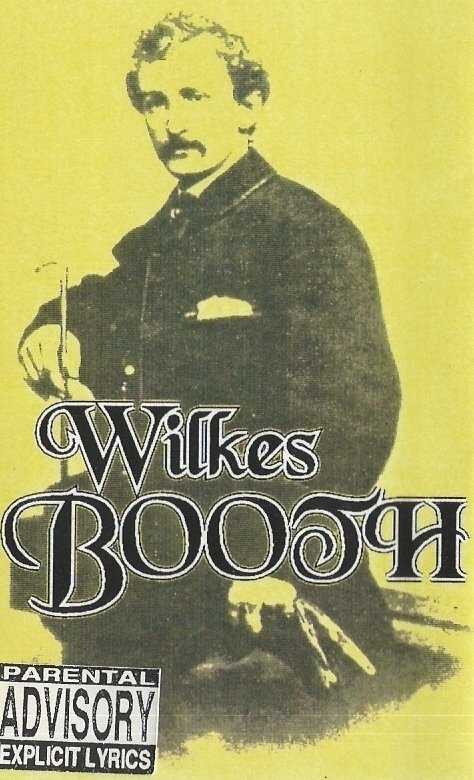 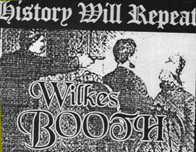 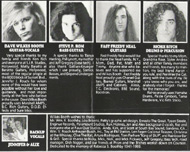 With a renowned booking agent intact and an appreciative fan base, the pieces were in place for the band to go all the way. However, the timing was wrong.

In late 1992, the music industry changed almost overnight, whereas the glitzy "Hair Metal" was no longer being embraced by the music industry. Unwilling to change styles and compromise it's integrity, the band returned to their home city of Rochester in western upstate New York.

After the industry's transformation, the band continued on, however, performing for a good cause at many benefit events, local night clubs, bars, and festivals, in an attempt to revive the spirit of old "Hair Metal." The band believed that there was still a market for this genre of music due to their continued success. 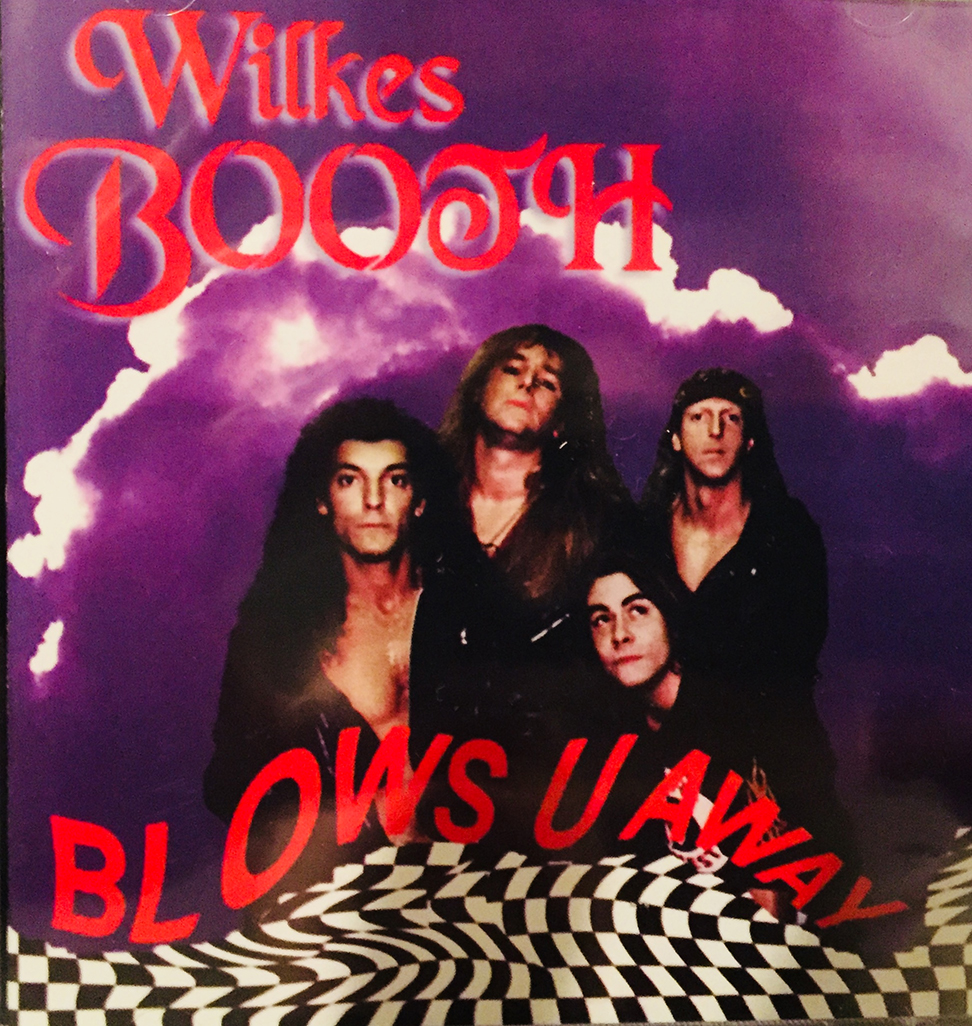 The album is in the "old school" pop rock vein of Poison and Motley Crue with early Van Halen and Randy Rhoads-era Ozzy Osbourne guitar styling — a 1970s and 1980s rock sound.

Their second release, entitled One Night Stand, came out in the spring of 2003. Carter was replaced by Kevin Rappenecker on bass, and the same extensive live playing ensued with this album, creating an enormous fan base and furthering the development of numerous connections. As with the first album, One Night Stand has seen its share of international sales and exposure. 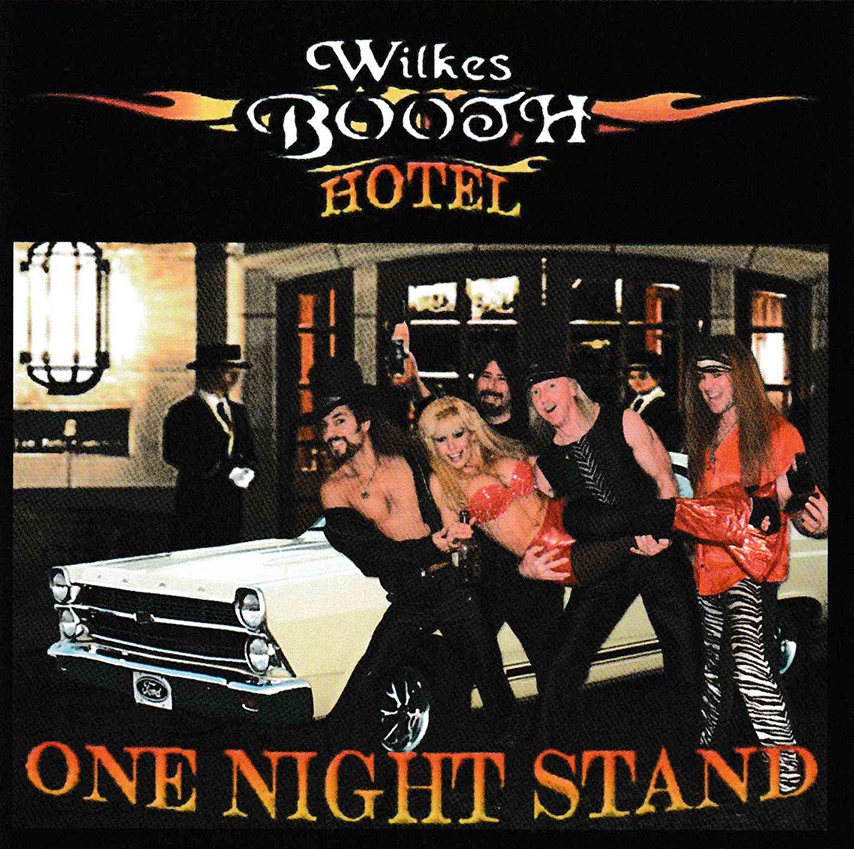 Wilkes Booth was relentless in their passion for a classic hard rock sound. They ignored trends in favor of playing firey covers from such artists as Aerosmith, Black Sabbath, and Metallica to Motley Crue, Poison, and Van Halen to name a few. The Wilkes Booth original material was written and played in the same passionate vein as well. 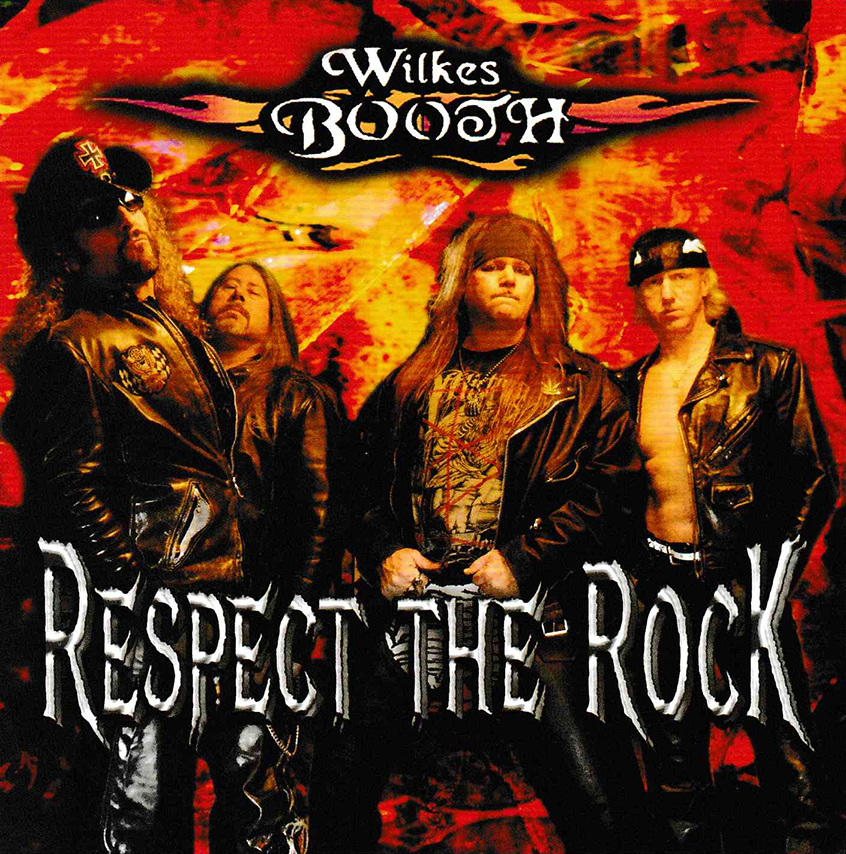 Wilkes Booth is truly one of the last over-the-top dirty rock and roll bands from back in the day. While the band has persevered through numerous losses, personnel changes, and unfavorable experiences, one cannot afford to take their eyes off of them for a single moment for fear of missing something outrageous. They finished their third studio album, entitled Respect the Rock, and prepared to embark on a massive promotional campaign.

Wilkes Booth had a revolving door of guys that they rehearsed with and played shows with over the years. The band was Bob, Mike, and Dave, and they kept switching bass players until they found Kevin Rappenecker.

In 1999, Wilkes Booth recorded a song titled "Determination" for the Camp Good Days 20th anniversary album. It was Dave on guitar, Kevin Scally on bass, Anthony "Tony" Barbato on vocals, and Paul Amorise on drums. This same year, the band had one of their classic fights, so Bob and Mike started jamming in another band with Donnie Gramatico (Lou Gramm's brother) on guitar and somebody on bass.

Dave hired Tony and Paul only for the recording of "Determination." Tony was hit by a car crossing the road in 2020 and died, so this recording was used in his tribute since it was the only professional recording that he had done. 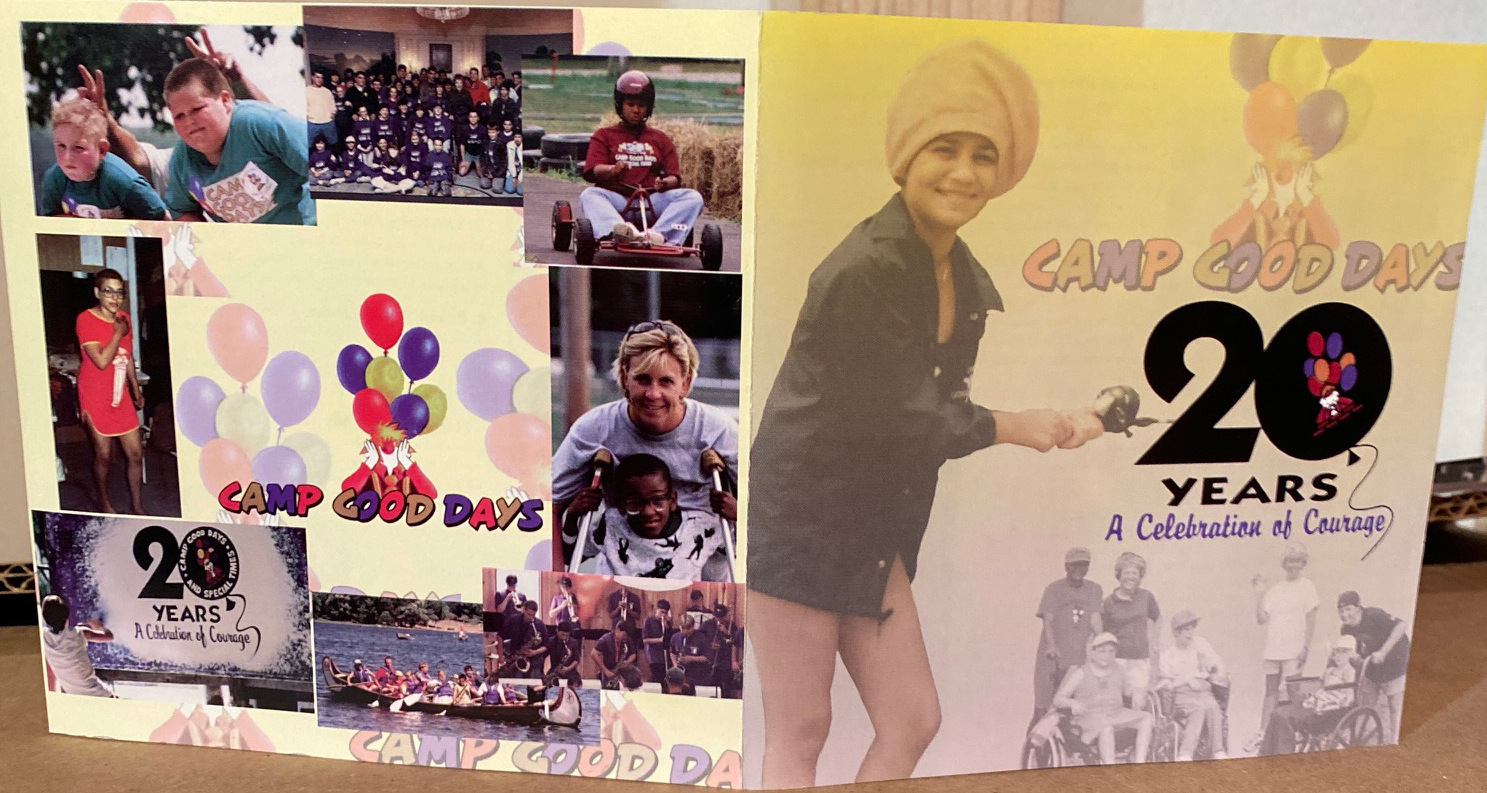 "Grand from the Band" Meets Goal for Taylor 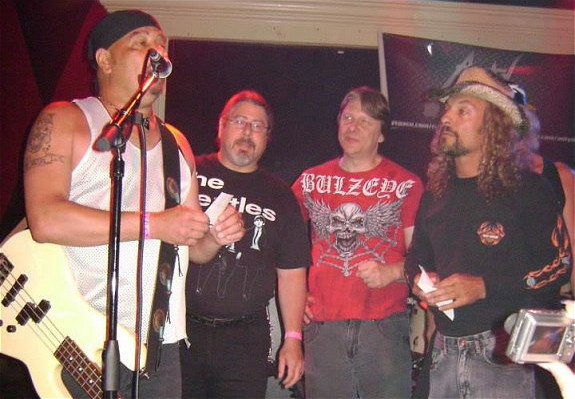 The Wilkes Booth band made short work of its quest to help an ailing local musician. Rochester-area bassist Billy Taylor was battling stage 4 inoperable brain cancer. With the recent release of their latest album, Respect the Rock, they solicited CD purchases at $10 each in raising $1,000 for the cause. On June 29, they presented the check to Taylor at Pineapple Jack's.

Unfortunately, Dave was not able to attend due to a crazy stalking female fan that wanted to harm him.

Here is a list of our songs, and cover songs, that we played at a few of our live performances. These 4 pages formed a booklet that people would choose songs from. 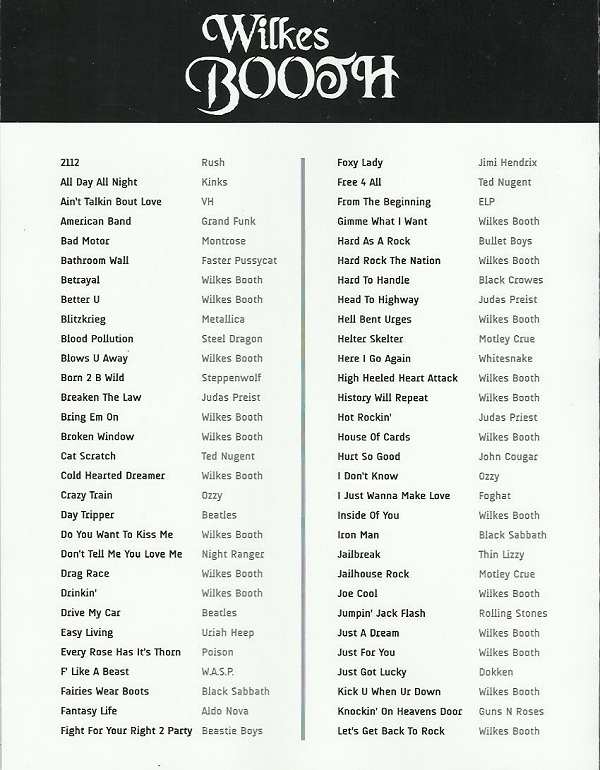 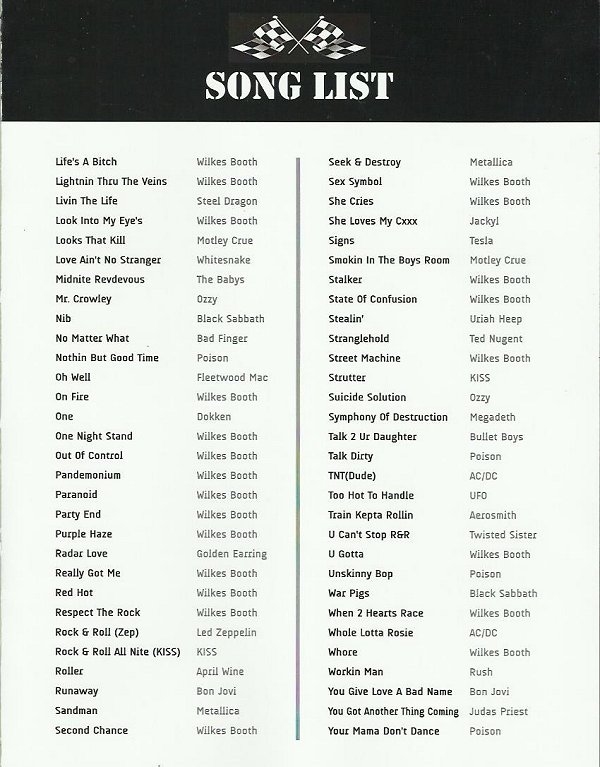 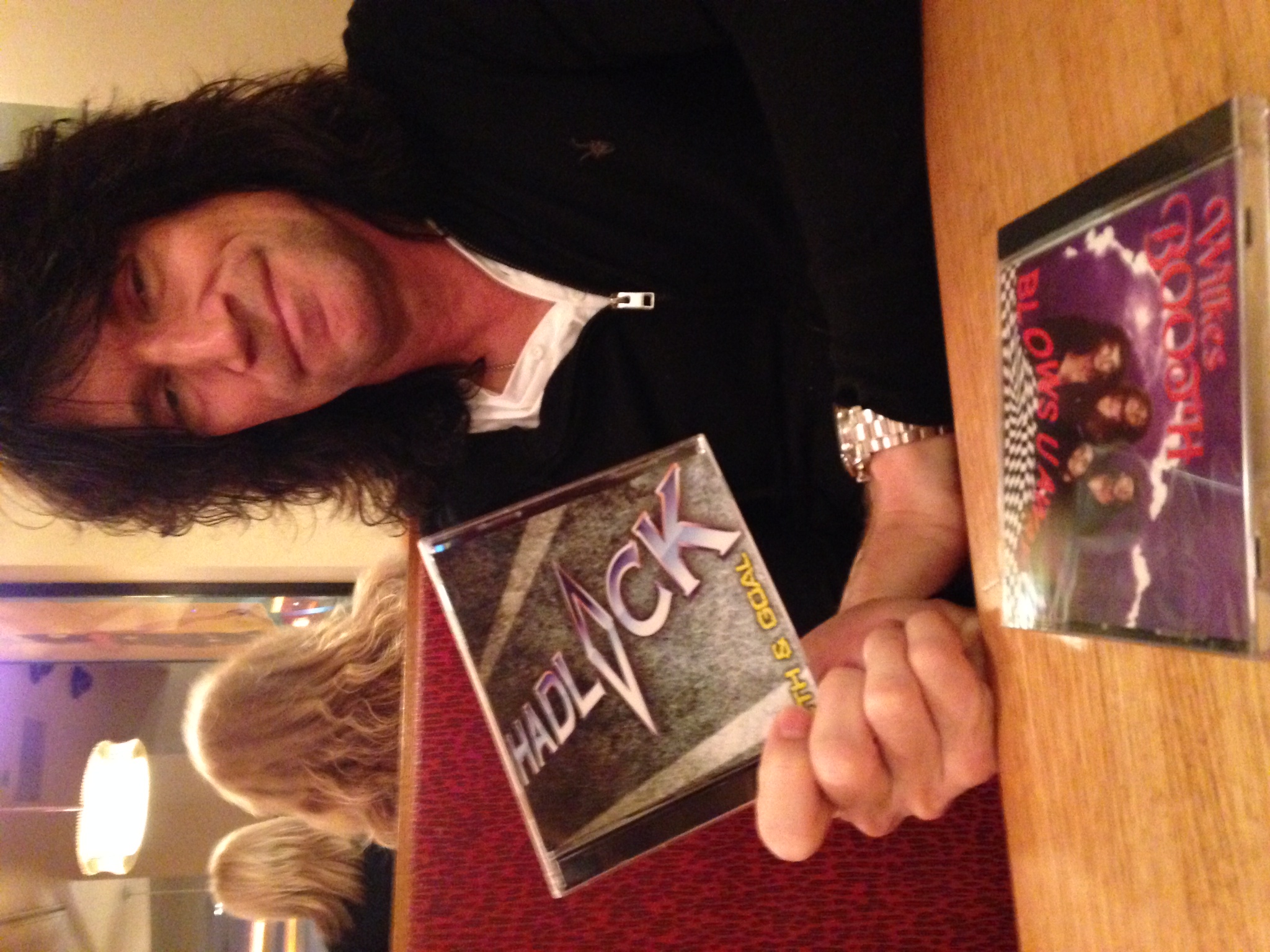 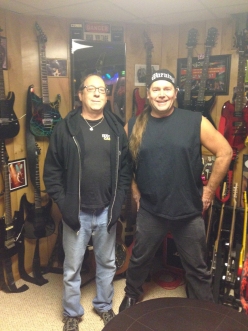 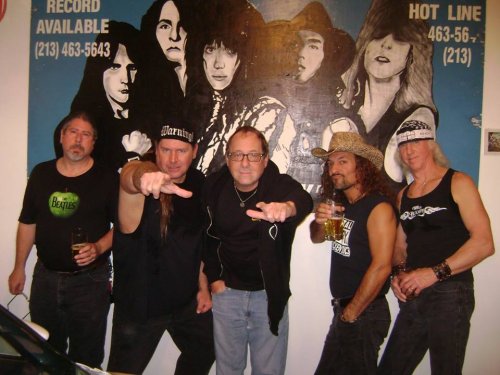 Former editor of iconic RIP Magazine, Lonn Friend, was in Rochester the week of October 28, 2014. Five years after helping to edit Hustler Magazine, Friend joined RIP Magazine in 1987. The publication was known for featuring exclusive interviews with heavy metal rock bands and was among the first to promote Metallica and Guns 'N' Roses.

Two of Friend's books share stories about mixing with many rock 'n' roll greats of the period — Life on Planet Rock (2006) and Sweet Demotion (2011). He's appeared in numerous television documentaries and has written liner notes for projects by Motley Crue, Bon Jovi, Dio, and Alice Cooper. Friend contributed to the health and fitness book The Rockstar Remedy by Dr. Gabrielle Francis. 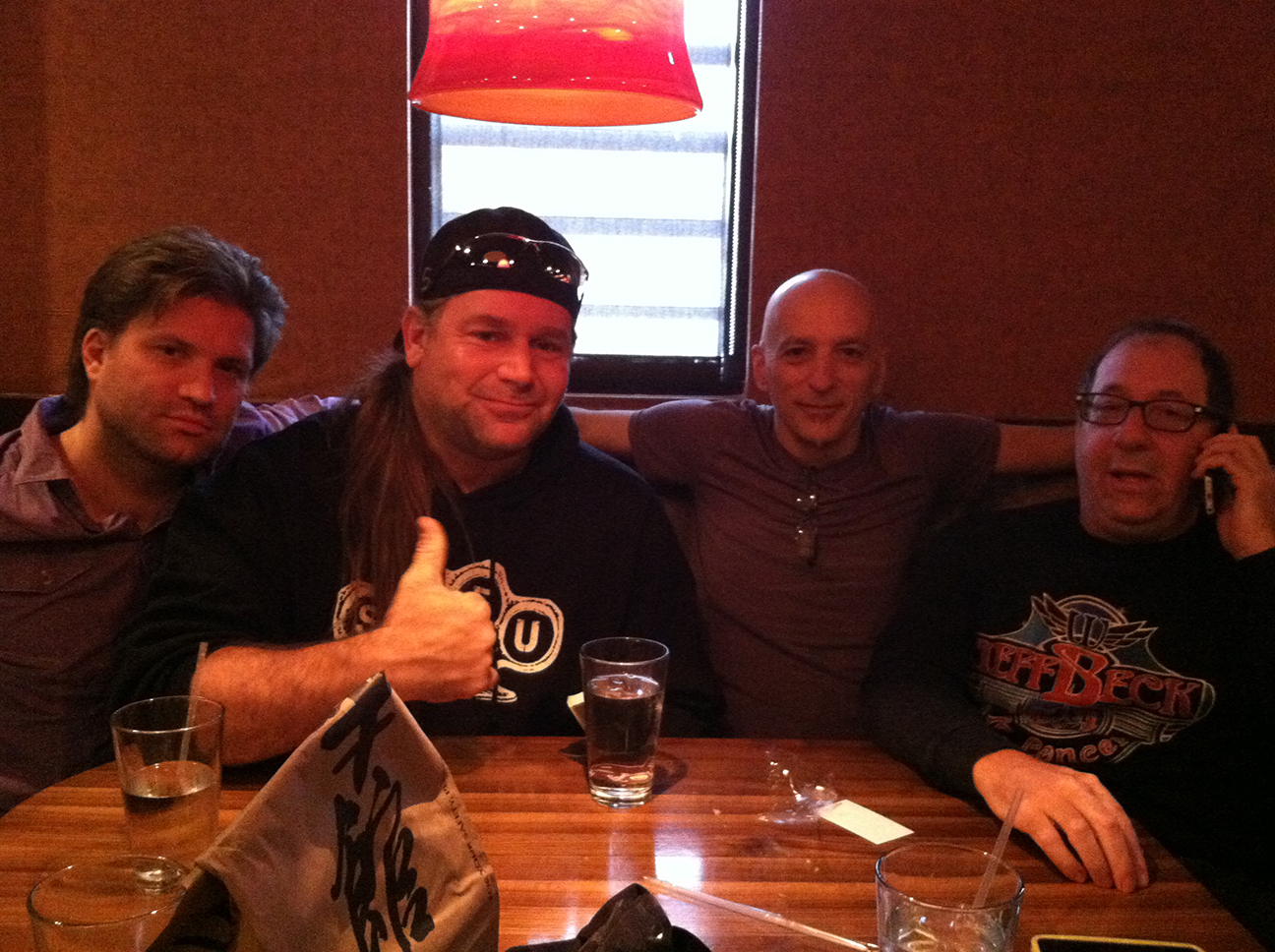 Below is a mockup cover of RIP Magazine for fun. 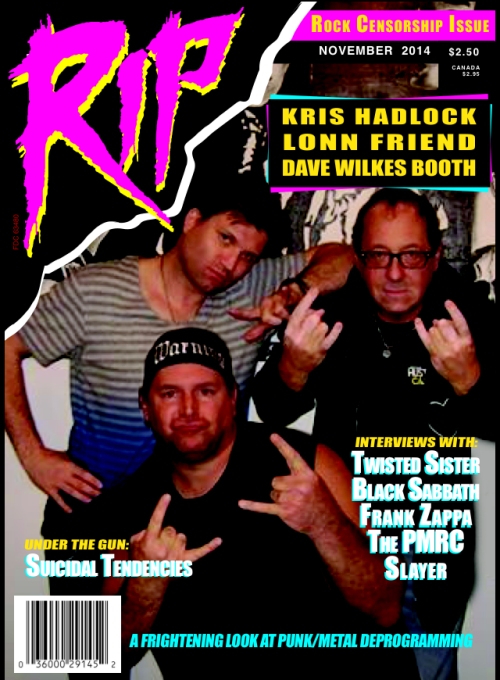 Things were rolling along quite nicely until 2016 when medical issues sidelined Dave and Mike. As a result, Bobby and Kevin joined other bands, and Wilkes Booth was sidelined.

The band had started working on album number four when this went down. The musicians stayed with the band. However, singer Bob "Rocker" had thoroughly ensconced himself in numerous golfing events and assembled his own cover band so he could play the lighter songs that Wilkes Booth refused to do and had no time for the band. He stopped returning calls and would not answer text messages.

Ultimately, the band found out on Facebook that Bob was claiming that he was fired from Wilkes Booth and formed his own band to look like the hero and garnish sympathy from anyone who would listen, and the masses ate it up like sheep on a feeding frenzy. Wilkes Booth moved on with longtime friend Dee St. James taking over on vocals. Together they finished album number four, aptly titled "Bid You Farewell," in regards to Dave Wilkes Booth's declining health and ability due to neurological development, and Dee St. James abruptly leaving the band due to physiological decay.

The band figured that it had hit the end of the road. That was until singer Todd Cragle approached them and expressed interest in joining. Todd came to an audition and sang 16 songs without the assistance of a teleprompter, flooring the band, and was immediately accepted. 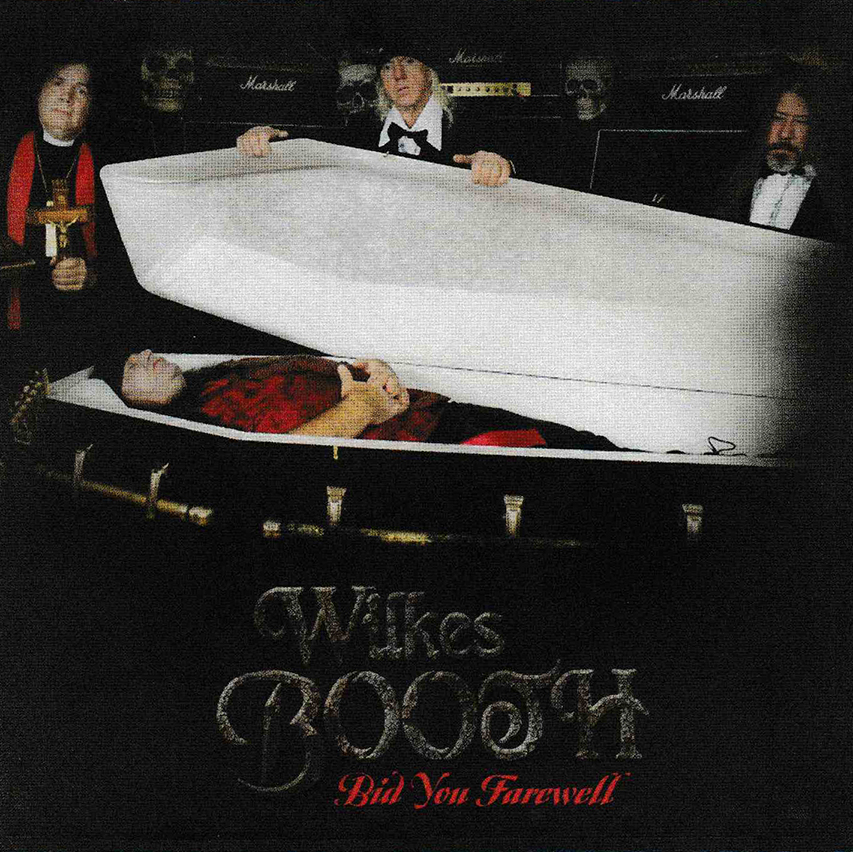 "Bid You Farewell" had just been released, and the band embarked on a small club tour across New York State, booked by agent Richard Radice. Radice had booked the band in lower-quality dives, stole the revenue from all performances, and was never heard from again. That was pretty much the last straw. The band had enough of the logistics of what compromises a rock band. Rappenecker, Cragle, and even Fittos started jamming with other bands while Dave Wilkes Booth stewed alone in the grand Wilkes Booth rehearsal facility.

As David was constantly recording licks, bits, and pieces of fretboard shred, he soon had a song backlog that needed recording. Unfortunately, in late 2019, the coronavirus (COVID-19) pandemic further delayed any attempts to record.

Finally, in 2021 David brought in a bass player named Dennis Jones (DJ) from The Tombstone Hands. DJ was also a graduate of the same high school that Dave attended in Pittsford, NY. In turn, Dennis brought in Mathius, a twisted Blues Rock vocalist from Wayne County, NY. This combination of talent bonded around Mike's drumming and was forged into malleable metal by Dave's over-the-top shredding! After a few rehearsals, it was off to Big Time Studio in Interlaken, NY, to record eleven new Wilkes Booth songs.

Unfortunately, in February of 2022, Mike unexpectedly died shortly after completing the basic tracks. Dave's 28-year best friendship and professional relationship with the hardest rocking drummer in Rochester, NY, came crashing to an end. After a painful period of time, Dave, Dennis, and Mathius completed the recording. One Last Ride is dedicated to you, Brother Mike! 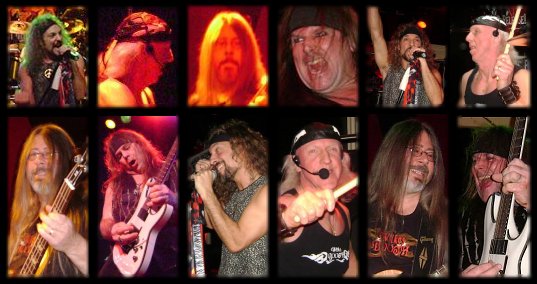 (This bar ruled! It was the best kept secret on the west side.)

The House of Guitars

West Side Sports Bar and Grill 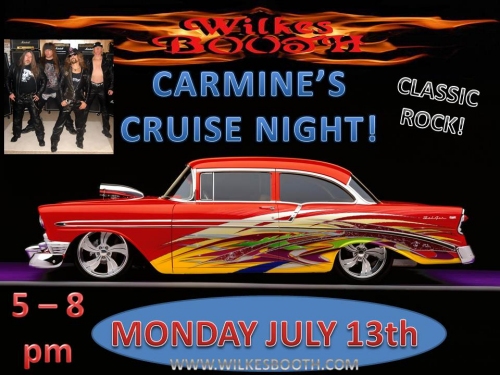